Phoenix Petroleum Philippines Inc. (PSE: PNX) has announced PhP427 million consolidated core net earnings from operating sources for 2010, about 140% higher than the PhP178 million earned in 2009. The company also reported consolidated revenues of PhP14.79 billion, up 152% over PhP5.87 billion in 2009. A substantial portion of this growth was brought about by the 127% increase in fuel sales volume during the year plus the 19% average increase in fuel selling prices compared to 2009.

Phoenix Fuels Life brand awareness efforts. The continuous investment in its retail, depot facilities, and logistics infrastructure brought up the company’s total assets to PhP7.7 billion in 2010, an increase of 54% from 2009. Total shareholder’s equity was PhP2.461 billion at the end of 2010 as against PhP1.53 billion in 2009 as a result of the successful issuance of preferred shares valued at PhP500 million and supported by the significant increase in core net earnings. Phoenix Petroleum recorded in 2009 an extraordinary gain of PhP573.4 million arising from its March 2009 acquisition of Bacnotan Industrial Park Corp. (BIPC). The one-time gain reflects the purchase of BIPC below its fair market value based on an independent appraisal which is required under prevailing accounting rules on business acquisitions.

The surge in fuel sales volume in 2010 was driven primarily by the company’s continuously expanding retail station network. After ending 2008 with 86 stations, Phoenix Petroleum’s network reached 120 and 161 stations at the close of 2009 and 2010, respectively. Of these stations, 123 are based in Mindanao, five in Visayas and 33 in Luzon. Approximately 30% are company-owned and 70% dealer-owned. At the same time, sales to commercial accounts, primarily to the airline, shipping, fishing, mining, power and transportation sectors, registered a continuous growth during the year. Core earnings per share for 2010 was PhP1.43 based on weighted average shares (taking into account the 40% stock dividend distributed in October 19, 2010) as compared to PhP0.83 recorded in 2009. The company expects to sustain its growth momentum into 2011-2012 with further investments in retail stations and depots in key trade areas. 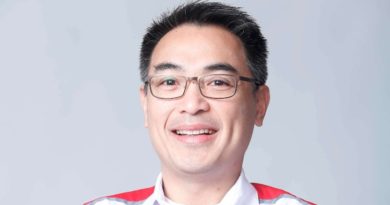