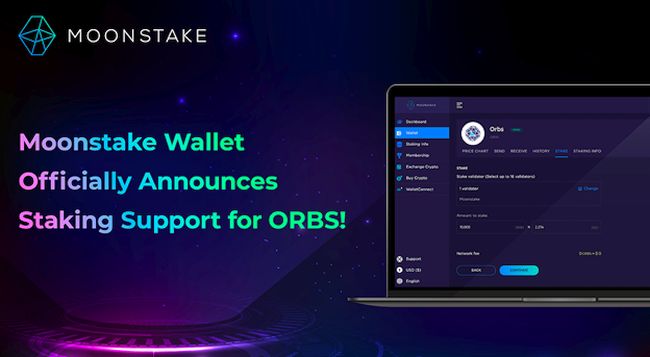 Moonstake started the staking business last year with the aim to create the largest staking network in Asia. Since then, we have developed the most user-friendly Web Wallet and Mobile Wallet (iOS/Android) with support for over 2000 cryptocurrencies. After a full-scale operation launched in August 2020, Moonstake’s total staking assets has grown rapidly to reach $900 Million, allowing Moonstake to become one of the top 10 staking providers globally.

Moonstake and ORBS entered into a strategic partnership in March, 2021. Through this partnership, Moonstake actively developed support for the staking of ORBS, Orbs’ official token, on Moonstake Wallet, as well as participating further in the Orbs blockchain ecosystem. The two parties will also host community building programs, research, training, events, and conferences with the goal to increase awareness and adoption of Blockchain and Distributed Ledger Technology in the Banking and Finance Industry. Moonstake and Orbs will discuss further potential provision of consulting services to financial institutions in the regions of Southeast Asia and Middle East.

How to stake ORBS on Moonstake Wallet

Here’s a simple 3-step process to stake ORBS with Moonstake Wallet:
1. Register your Moonstake Web wallet (https://wallet.moonstake.io)
2. From the wallet screen, select ORBS and click the “Stake Now” button.
3. Confirm the staking information, then click the “Staking” button and enter your wallet password.

How ORBS Staking Works:
– Hold ORBS Token and no minimum amount for staking.
– Agree to lock in and stake ORBS.

What is Guardians Role:
Guardians play a central role in the Orbs PoS model – they are expected to be key participants within the Orbs Universe, who enforce the security of the network, align with the long term Orbs vision and actively work to make this vision a reality. A core role of the Guardians is to review the Validators, monitor their operations and ensure proper network operation and security by approving Validators that follow the protocol correctly.

How to get Rewards of ORBS staking:
Token holders that delegate to an active Guardian are rewarded in proportion to their stake. Annual reward is up to 8% of the Delegators staked tokens (subject to an 80M Orbs Token cap on total rewards).

* Delegators are ORBS token holders who assign their voting weight (stake) to Guardians, empowering them to maintain security and uphold the long term vision of the ecosystem.

How ORBS unstaking works:
If token holders want to send an asset that is currently staked, they will need to unstake it first. The unstaking of tokens will take a full 14 days before they become available, therefore you will not be able to send the tokens immediately. The period during which the tokens cannot be transferred is called the “lock period”.
Moonstake looks forward to deeper cooperation with Orbs to increase our market presence in the key regions of Japan, Southeast Asia, and the Middle East, as well as bring the diverse ecosystem of staking coins to user communities worldwide.

With a full-scale operation launched in August 2020, we expanded our business and as of now, our total staking assets exceeded over USD 900 Million. https://www.moonstake.io/

Orbs is a free, open-source, public blockchain infrastructure designed for mass usage applications, providing enterprise-grade scale, security and support. Orbs blockchain network expands the offerings of public blockchains by supporting permissioned applications developed by existing for-profit businesses, while also supporting purely decentralized apps and being a prime platform for launching decentralized finance applications. Founded in 2017, Orbs is being developed by a dedicated team of more than 30 people out of its offices in Tel Aviv, Israel, London, UK, Singapore, and Seoul, South Korea. Orbs was named Gartner’s “Cool Vendor in Blockchain Technology” for 2018. https://www.orbs.com/