Makati—(PHStocks)—Philippine Bank of Communications (PBCom, PSE: PBC) posted an Operating Income of PhP1.8 billion on the back of higher income from recurring business activities.

Net Interest Income in the first half of 2016 improved to PhP1.2 billion or 6.3% higher compared to last year as the bank expanded its Securities and Loan portfolios by PhP5.2 billion and PhP4.8 billion, respectively. The headway in the bank’s CASA to Total Deposit ratio broadened the decline in interest and finance charges on deposit liabilities by 2.2% or PhP10.2 million.

Income from trading activities grew to PhP62.1 million, a 538.8% increase from a loss of PhP14.2 million during the first half of 2015. Gains from foreign exchange transactions also reported a positive growth of 51.7%.

The advancement in lending and trading activities was further supported by the third equity infusion of the PG Holdings Inc. amounting to PhP1.4 billion on June 29, 2016. The additional capital was injected ahead of its September 2016 schedule.

The bank’s financial performance in the first six months of 2015 contains a PhP94.6 million in fair value gain under other income and its corresponding deferred tax provision of PhP28.4 million. Excluding these two items, operating income would have improved by 7% or PhP114.2 million and net income by PhP40.6 million or 235.0% growth in the first half of 2016.

PBCom’s focus to build up its core businesses has shown improving trends. The bank has demonstrated consistent strengthening in its financial standing and will continue its efforts to deliver optimum value to its stakeholders. 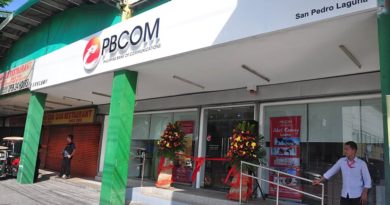 PBCOM to Focus on Core Strategy