Manila–(PHStocks)–Seventeen years since it first opened its doors to the public, EastWest Bank, a subsidiary of Filinvest Development Corporation (PSE: FDC), is now one of the country’s fastest growing and most profitable banking institutions.

The year 2011 was marked with performance milestones that have set the stage for a bigger and bolder 2012 for one of the country’s top performing banks.

From 2006 to 2011, EastWest Bank has displayed exceptional growth. In 2006, the bank registered total assets of P30 billion. As of last year, the bank has over P90 billion total registered assets which is a compounded annual growth rate of around 29 percent since 2006.

Last year, the bank made great strides in its core businesses which exhibited healthy growth. Unaudited figures as of December 2011 show that bank deposits grew by 16.9% year-on-year while corporate loans moved up 11.2% on the same period. The bank also saw a 24.9% year-on-year increase in consumer loans as of the last quarter of 2011. Moreover, based on unaudited figures, the bank registered a 16.90% return on equity and return on assets of 2.05% as of end-December of last year, making it one of the top-performing banks in the industry. The bank had a capital adequacy ratio of 15.12%, as of year-end, greatly exceeding the minimum 10% ratio required by the Bangko Sentral ng Pilipinas (BSP).

To date, EastWest Bank is ranked 17th largest among 38 commercial banks in the Philippines in terms of total assets.

The bank also started to pursue an aggressive expansion plan which included the acquisition of the Green Bank of Caraga in Butuan City during the third quarter of the year, boosting its network by 46 more branches.

Also last year, EastWest Bank landed a spot on The Asian Banker’s prestigious list of the 500 strongest banks in Asia for 2011. The Asian Banker, a multinational institution which provides business intelligence on the financial services industry, also named EastWest Bank as the largest gainer with 191% increase in 2010 profits vs. 2009 income.

Moreover, the year 2011 saw EastWest Bank successfully launching its new brandmarks. The bank adopted a new logo as well as new corporate colors. Its new tagline “Your Dream Our Focus” is a clear and straightforward pledge to help clients achieve their dreams.

To emphasize the new customer-centric tagline, the bank also launched its biggest bankwide promo to date—the Dream Big, Win Big raffle. So far, the bank has given away several brand new laptops, smartphones and tablets and it is set to give away a single-bedroom condominium unit at The Beaufort, two Mercedes Benz cars and up to P1.7 million in cash prizes to lucky clients in the grand draw.

With an impressive year on its heel, EastWest Bank faces the new business year with renewed confidence and a fortified battle plan as it moves closer to competing headon with much bigger counterparts.

East West Banking Corporation (EastWest Bank) opened its doors to the public on August 1, 1994. The Bank is a subsidiary of the FDC, the publicly listed holding company of the Filinvest Group that evolved from a consumer business founded by Andrew L. Gotianun, Sr. in 1955. FDC is one of the country’s premier conglomerates, with business interests in real estate development, financial and banking services and the sugar business. Through the years, EastWest Bank has successfully capitalized on the financial strength and synergy from the business organizations under the Filinvest Group. 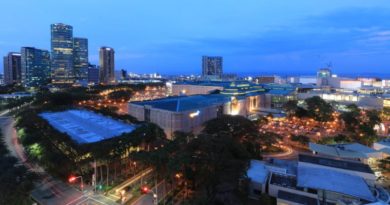