URC’s Philippine branded consumer foods (BCF) business was the main driver for total company growth as it increased sales by 18.5% for the quarter, though BCF International tempered the company’s overall top-line performance. Significant sales of the company’s sugar division, which grew 86.1% for the same period, also contributed to the increase.

URC’s operating income was at PhP2.34 billion for the quarter, up 19.5% from the same period in the previous year. The increase comes on the back of significant contribution from the branded foods business due to better volumes and continued decline of input prices, and the increased income for the sugar division, which was also due to higher volumes.

Net income for the quarter, on the other hand, was PhP2.295 billion, down 2.8% from the PhP2.362 billion posted in the prior year, due to unrealized forex losses as a result of the continued appreciation of the local currency.

The company’s balance sheet remained healthy with strong cash levels. At fiscal year end, URC was in a net cash position of PhP6.216 billion with, a financial gearing ratio of 0.29 (vs. 0.32 in FY12) as the company retired its $200 million debt last January 2012.

Sales performances by business are as follows:

URC’s branded consumer foods (BCF) group, including the packaging division, increased sales of goods and services by PhP1.381 billion, or 9.7%, to PhP15.553 billion for the first quarter of fiscal year 2013, compared to PhP14.172 billion posted in the prior year.

BCF Philippines accelerated sales and posted growth of 18.5%, to register first quarter sales of PhP9.933 billion, compared to PhP8.384 billion in the prior year. Beverage was the primary driver as the coffee business sustained its strong performance, while ready-to-drink beverage also posted significant growth. The company remained the dominant market leader in salty snacks, candies, chocolates, and RTD tea in the Philippines.

Net sales of URC’s international BCF business increased by 4.9% (in dollar terms) to end at $129 million or PhP5.316 billion for the quarter. Vietnam gained more sales momentum on the back of its ready-to-drink beverages, with salty snacks also contributing. Indonesia sales increased significantly, driven by salty snacks and complemented by RTD beverage. Overall top-line growth was tempered by Thailand’s performance as the year-on-year comparable was tough with first quarter sales of prior year being abnormally high due to panic buying during the floods. The company continued its initiatives to recover the biscuits and wafers markets, which were affected as consumption for discretionary products slowed down after the flooding. URC remains to be the number one player in these two categories.

URC’s commodity foods group revenues amounted to PhP2.446 billion for the first quarter of fiscal 2013, up by 29.3% from the year-ago period. This was mainly due to the 86.1% increase in net sales of the sugar business because of better volumes as milling season started earlier this year while the flour business declined by 7.8% as imports of low cost flour increased and calamities affected Visayas and Mindanao.

Net sales of URC’s agro-industrial group amounted to PhP2.099 billion for the quarter, a 9.6% increase from the prior year. The farms business grew significantly by 35.7% due to better selling prices and volumes. The feeds business, on the other hand, posted a decline of 14.6% due to lower volumes brought about by the relatively lower population of backyard hog raisers as some of them exited during the time of low pork prices last year. 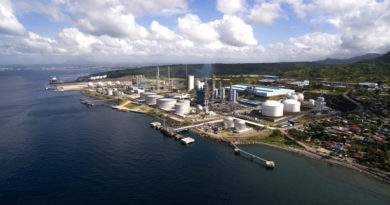