Cainta—(PHStocks)—According to global property consultant CB Richard Ellis (CBRE), Metro Manila continues to be saturated and the need for new areas to be developed has become imperative in order to accommodate the growing demand in the market. Areas such as Laguna, Cavite, Bulacan, Pampanga, Cebu, Bacolod, Iloilo, Davao, Cagayan De Oro and Zamboanga City are gaining investments for their economic potential.

Sta. Lucia Land Inc. (PSE: SLI) is poised to take advantage of this massive opportunity as the Company has been developing majority of its projects outside the capital for the past years.

Residential communities, commercial areas and vertical towers in areas in emerging cities outside the metro have been a contributing factor in nation-building.

SLI is already positioned in most of the areas for growth identified by CBRE. 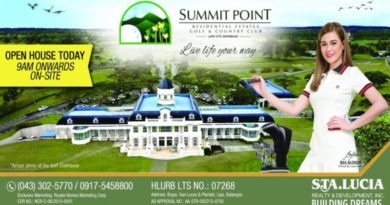