Whenever I go home for a short vacation, one of the really disappointing things that I continue to notice in the Philippines is the darkness in roads—and some are even in major roads. Here’s one example. So our home is in Molino, Bacoor, Cavite. The fastest route to get there from the Ninoy Aquino International Airport (NAIA) Terminal 1 or Terminal 3 is via the Manila-Cavite Expressway, commonly known as the “Coastal Road”. From the Coastal Road, you will exit at the Emilio Aguinaldo Highway, and then go straight to Molino Boulevard.

Now that boulevard, despite its being a blessing in that you don’t have to bear the heavy traffic at the Aguinaldo Highway, has its share of downsides as well—the utter darkness at night. Really – it is just too dark. All the way from the beginning of the road (from the Aguinaldo Highway) up until Molino Road, there aren’t any light posts that are supposed to light the way. Well, at least not until you reach a gasoline station in the middle of the stretch. After that, darkness again. It is as if you are travelling a secluded road in the middle of nowhere.

I might be exaggerating, you would say. Well, my estimate is that for the whole length of the boulevard, there could be just between 20 and 30 light posts. I am not sure. But that is a wild guess. And another guess is that the road is more than a kilometer. In fact, if my calculations (or estimates) are correct based on the scaling of Google Map, I would say that Molino Boulevard would be between 4km and 5km.  More than 4km, I believe. But anyway, that’s that. And that is my estimate: 20 to 30 light posts within 5km of road. Utter darkness.

It doesn’t stop there. You see, we live in one of the subdivisions of one of the companies of Vista Land (PSE: VLL). We chose the location because we are less than an hour away from Manila (where I hail from), and about 20 minutes from my other half’s family and relatives (If you are a Filipino, you know how important it is, most of the time, to be close to the family—figuratively and literally). So I digress. We chose the location as well because of access—the road—which is the Daang Hari Road, a highway (sort of) that goes straight from Alabang to Molino, Cavite. Anyway, the long and short of it is that between 200m and 400m from Alabang, you can never find light posts again. Well, there is already a Dampa-style of restaurant and wet market there now, so I think there are quite a few posts within that area; but after that, darkness again – at least not until you reached one exclusive, high-end subdivision.

This is not angst. It is just disappointing to think that in these small details, the Philippines still has a long way to go. And the problem that I see is that this is one of the important things to have anywhere. Light to light the way. I can’t help but compare the situation here in Singapore, wherein for major roads and streets alone, you can find a light post every 10m.

I might be sounding boring now, but at this point, let me get to what I wanted to talk about. So, how to relate my narration above to my title post? It’s this. I have read a report from the Manila Standard that the Metro Manila Development Authority has asked the Department of Science and Technology (DOST) to help solve the metro’s problems in traffic, floods, and to develop a new transport system within viable areas. One interesting point to note: MMDA requested DOST to develop cost-efficient speed radar guns, solar traffic lights, solar pump gauges, wind generators to power street lights, among others.

Solar traffic lights: what a wonderful idea. And where else to test its feasibility other than in the major roads I listed above—at least those who will put it up won’t have to say that the project isn’t successful because those good-for-nothing thieves cut down the systems they’ve put in place, and so on and so forth. Not that I think those roads are safe—nothing is anyway to those minds that are hell-bent on wreaking havoc on anything. But for feasibility studies’ sake, try those roads.

Despite my rants above, I am glad that MMDA has started to think of how technology could aid the metro’s daily problems. I wonder though, why they have not thought about this before. There have already been a lot of studies in terms of solar power implementation in the Philippines.

This 2006 report also mentioned a 24-hour electricity service from a centralized solar photovoltaic (PV) system in Pangan-an Island, Cebu, Philippines. The solar power plant, donated by the Kingdom of Belgium, has been operating since December 1998 and has been supplying 230VAC electricity to around 200 households in the island—providing electricity for lighting, radio and TV sets.

This article from The Philippine Star discussed about Paris Manila Technology Corp.’s (PAMATEC) solar energy project implemented in Masbate province. The firm executed the Philippine Rural Electrification Service (PRES) through a French loan worth Euro17.5 million borrowed by the National Power Corp. to put up 5,129 solar panels in impoverished barangays in the province. The project, completed in December 2009, provides an electricity rationing system of 200kWh per day for houses fitted with solar panels.

There are many others. These projects have already been implemented in said provinces. I think it is about time to start implementing it in the metro. While a solar-powered area or locality in Manila will need lots of preparations and infrastructure set ups, why not start with roads?

Well, this could definitely be a start. I hope the MMDA and the DOST will put in their best efforts to see these goals into fruition. I do believe that once these projects, in particular those that are solar-energy-related, were implemented and proved to be successful, they will not only “light the way”, but they will also, and let me say “At last!”, kick start the country’s technology innovations once again.

EDC Board Approves US$ Bond Offering 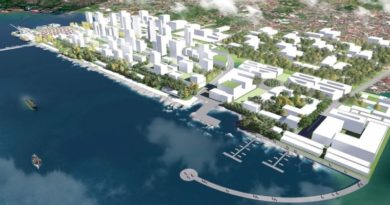