Pasay—(PHStocks)—SM Investments Corporation (SM) reported that net income for full-year 2012 amounted to Php24.7 billion, for a higher than expected growth of 16.3% from its 2011 earnings of Php21.2 billion. The growth in earnings was broad-based, with SM’s mall, property, retail and banking businesses delivering strong results. Revenues increased 12.0% to Php223.9 billion from Php199.9 billion in the previous year. EBITDA rose 24.2% to Php54.9 billion, for an EBITDA margin of 24.5%. Return on equity stood at 14.3%.

SM President Harley T. Sy said, “SM’s strong full-year results were anchored not only on very favourable economic conditions, but also on the ability of our businesses to efficiently and effectively address the needs of our customers, who have grown increasingly more discerning. Our performance during the year is testament to the hard work, focus, and dedication of the whole SM organization. With the positive economic outlook for 2013, we are confident of sustaining SM’s expansion and growth moving forward.” 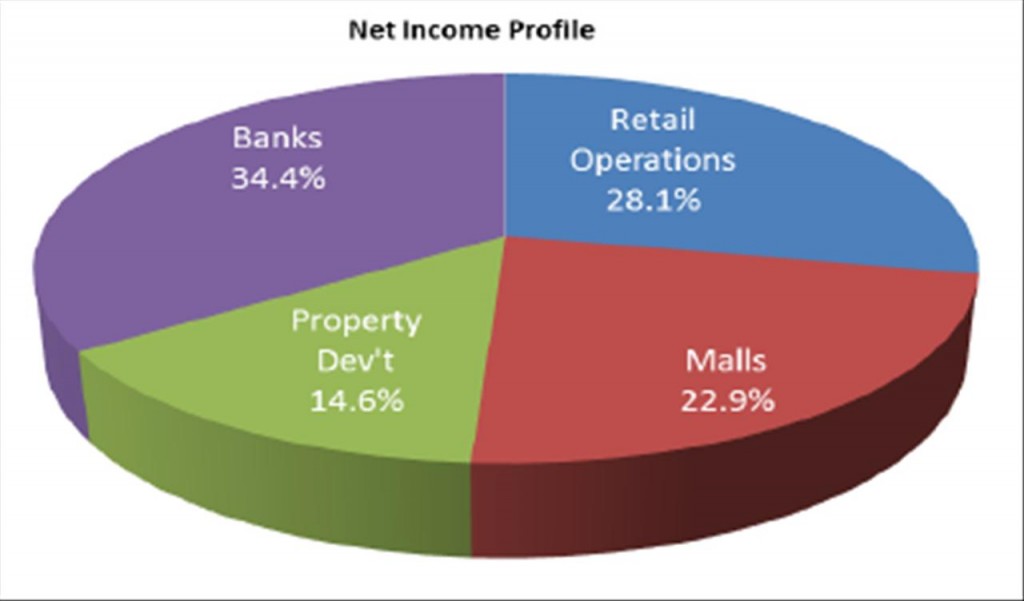 Net interest income amounted to Php36.2 billion, up 7% even as volume growth was offset by the impact of regulatory changes and excess system liquidity. BDO’s customer loan portfolio grew 15% to Php769.0 billion, while CASA supported the increase in total deposits to Php931.6 billion. Driving BDO’s solid performance was the robust expansion of its lending, deposit-taking, and fee-based businesses.

Total non-interest income rose 18% to Php24.6 billion, contributed substantially by trading gains from treasury activities, which amounted to Php8.2 billion. The bank was able to capitalize on market opportunities and realize exceptional gains from its investment portfolio.

The bank continued to set aside Php4.9 billion in provisions for the year. Its gross nonperforming loan (NPL) ratio further declined to 2.8%, while provisions covered 126% of NPL by year-end 2012.

The bank’s capital base stood at Php157 billion, the largest in the industry, while its Capital Adequacy Ratio (CAR) and Tier 1 Capital ratios were comfortably above the regulatory minimums, at 19.1% and 15.2%, respectively. Return on Common Equity settled at 11.5% in 2012.

With the Philippine economy expected to sustain its growth momentum, BDO looks forward to tapping the promising growth opportunities in its customer segments, capitalizing on its established business franchise and wide distribution network.

In view of the positive outlook for the economy in 2013, SM Retail will continue to expand its various store formats, especially its highly-successful stand-alone SaveMore stores, which are typically located in areas underserved by organized retail.

SM Prime Holdings, Inc., (SM Prime) had a good year in 2012 with a higher-than-expected growth of 16% in consolidated net income of Php10.5 billion from Php9.1 billion in 2011. Revenues rose 14% to Php30.7 billion. EBITDA increased 12% to Php20.7 billion, for an EBITDA margin of 67%. The strong performance of SM Prime was due largely to rentals from the new mall space created in 2012 and to its healthy same-store rental growth rate of 8%.

SM Prime opened six new malls during the year, five in the Philippines and one in China. The new malls in the Philippines were SM City Olongapo in Zambales, SM City San Fernando in Pampanga, SM City Consolacion in Cebu, SM City General Santos, and SM Lanang Premier in Davao. These new malls, along with the expansion of the existing SM City Davao, raised GFA of SM Malls in the country by 10% to 5.6 million sq.m. In China, SM Prime opened its fifth mall in Chongqing, China’s largest city. SM City Chongqing has a GFA of 149,000-sqm, bringing the total GFA of SM malls in China up to 794,248 sqm, 23% higher than in 2011.

SM China contributed positively to SM Prime’s overall results. These malls delivered a 24% increase in net income of Php1.1 billion. In addition to its newly opened mall in Chongqing, the company’s four other China malls are located in the cities of Xiamen, Jinjiang, Chengdu, and Suzhou. The average occupancy rate of the company’s malls in China stood at 92% as of year-end.

Revenues from real estate sales increased by 33.3% to Php21.6 billion, from Php16.2 billion in the previous year. Meanwhile, EBITDA amounted to Php5.6 billion, for an EBITDA margin of 26.0%.