Pampanga—(PHStocks)—SFA Semicon Philippines Corp. (PSE: SSP) (formerly Phoenix Semiconductor Philippines Corp.) announced the election of Byunggil Go as President following the resignation of Mr. Byeongchun Lee by its Board of Directors in its meeting today (June 13).

Lee, who has been President since the start of commercial operations of the leading memory semiconductor assembly company in 2010, will move up to the SFA Semicon Korea (SSK) headquarters to head the group operations center in South Korea. It has majority and controlling stake in SFA Semicon Philippines (SSP) and a subsidiary also producing memory devices in China.

Go was the head of manufacturing of SSK for five years until this election, and brings with him 20 years of experience as senior manager of Samsung Electronics prior to joining SSK. He has a PhD in business administration.

“I am honored to assume the presidency of SSP which has steadily grown and delivered consistent profitability in its almost seven years of operations,” Mr. Byunggil Go said. He gave recognition to Mr. Lee who is credited with the continued expansion of its production business with Samsung since 2011, as well as steering it through the volatile and challenging global semiconductor industry in 2015-16.

Lee will stay as President until the close of office hours on July 2, and Mr. Go will assume the presidency effective July 3.

Go took note that the Company is poised to take advantage of the industry’s strong recovery which signals an uptrend in the business cycle beginning 2017, despite geopolitical uncertainties. SSP reported gross revenues of US$ 50 million in the first quarter, up 22% from the US$41 million earned in the same period last 2016.

SSP, previously known as Phoenix Semiconductor Philippines Corp., plans to carry out the strategic expansion of its manufacturing capacity and to serve more customers within the year. Construction of the Phase 2 manufacturing plant is now more than 50% complete and is on schedule for completion and start-up of equipment installation by September.

The Securities and Exchange Commission approved the amendment in its corporate charter that authorized the change of corporate name to SFA Semicon Philippines (SSP). Effective June 6, the Company’s ticker symbol became “SSP” from the previous “PSPC”. 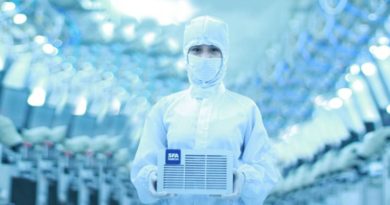