Makati–(PHStocks)–Philippine Savings Bank‘s (PSE: PSB) profits grew 12% year-on-year as it reached a record-high of PhP2 billion from PhP1.8 billion in 2010. The growth  in net income came primarily from a 14% improvement in its core net interest margin due to the expansion of its balance sheet.

PSBank’s assets stood at PhP120.3 billion from PhP104.1 billion the previous year for a 15% growth. The Bank’s gross loans grew 9% to PhP66.1 billion with its top loan products, Auto and Mortgage, expanding by 13% and 9% respectively. The higher loan portfolio was posted  in spite of the 3.2% decline in industry passenger car sales and the interest rate competition on mortgage loans. Investments in government securities likewise rose by 18% to PhP31.1 billion due to the increase in the funding base of the Bank.

Meanwhile, the Bank’s deposits grew by 16% in 2011 as it expanded its network with 20 additional locations to end the year with 200 branches. It likewise added 126 new ATMs of which 105 were in offsite locations in line with its thrust to increase customer touch points via various channels. Of these offsite ATMs, 43 were installed in LRT stations to serve its commuters and to compliment the 15 PSBank ATMs in various MRT stations.

The increase in operating expenses was tempered at  7% even with the Bank’s investments in branches, ATMs and IT infrastructure.

The Bank’s NPL ratio likewise declined to 3.1% which compares favorably versus the 6.2% average ratio for the thrift banking industry as of 30 September 2011.

PSBank recently issued PhP3 billion of 10-year Subordinated Notes. These Notes will further improve the Bank’s capital adequacy ratio. The issuance was more than 2X oversubscribed, allowing the Bank a 5.75% per annum rate or below the initial pricing guidance. The Notes were rated PRS Aaa by Philippine Ratings Corporation.

The Bank was also recognized last year as the strongest savings bank in Asia by The Asian Banker magazine. 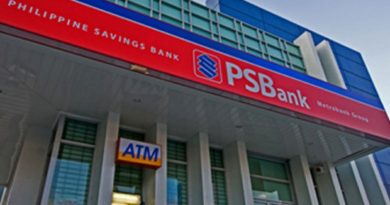