About 94% of the group’s consolidated revenues were from the sale of liquefied petroleum gas (LPG), while the remaining 6% came from sales of industrial gases, real estate and pharmaceutical products.

Income from operations was at PhP1.6 billion, a 16% increase from 2017’s PhP1.37 billion, driven by revenue growth and efficient management of operating expenses. PPC’s unaudited consolidated net income for the year 2018 stands at PhP1.405 billion, up by 12% from the PhP1.25 billion net income in 2017, and is within the company’s target for the year.

In 2018, PPC completed the construction of 12 new refilling plants nationwide: four in Luzon, one in Visayas and seven in Mindanao, adding a total of 577MT to its total storage capacity and bringing its products closer to the market. For the year 2019, the company will continue its expansion projects in its marine-fed terminals and refilling plants to further increase its storage capacities and bring the company’s LPG products much closer to the intended markets.

Pryce remains positive that the continued implementation of the TRAIN Law, along with the company’s expansion projects, will drive the LPG volume up for the year 2019. PPC targets a net income of PhP1.75 billion (plus or minus 10%) for the year 2019. On June 7, 2018 and December 14, 2018, the company declared payment of cash dividends out of its unrestricted retained earnings, at PhP0.12 a share.

Sometime after the first half of 2020, when the company’s various expansions in its LPG business shall have been completed, PPC intends to adhere to a previously adopted policy wherein 50% of the prior year’s consolidated income after tax will be distributed in cash to the shareholders as dividends. 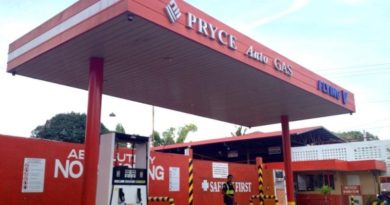