Consolidated Core Income for the period amounted to PhP17.7 billion, 6% lower year on year, as a PhP4.8 billion decline in EBITDA was moderated by the PhP7.4 billion net gain from the sale of the Company’s 25% stake in Beacon Electric Assets Holdings Inc. Reported Net Income reached PhP12.5 billion, 33% lower than the previous year, on account of a further provision against our investment in Rocket Internet.

Consolidated EBITDA decreased 13% to Php30.8 billion, mainly due to increases in subsidies and provisions for receivables and inventory, to support initiatives to grow the Group’s data and broadband businesses. These included the offering of affordable smartphones in order to raise the penetration of web-capable devices in the Group’s mobile subscriber base.

EBITDA margin for the first half of 2016 stood at 38%, reflecting the impact of the changing revenue mix, as ILD and NLD revenues continued their long march towards lower levels.

As of end-June 2016, the Group’s consolidated net debt and net debt to EBITDA stood at US$2.7 billion and 1.96x, respectively. Gross debt stood at US$3.4 billion, 37% of which is US$-denominated. Taking into account our U. S. dollar cash holdings and hedges, only US$300 million or 9% of the total debt is unhedged.

The Group’s debt maturities continue to be well spread out, with about two-thirds of total debt due to mature beyond 2018. Maturing dollar loans, including the US$228 million dollar bonds due in 2017 shall be refinanced largely in Philippine pesos. As of end-June 2016, PLDT’s investment grade ratings remained unchanged.

Earlier today, the PLDT Board approved an interim dividend of Php49 per share. “In view of our current elevated capital expenditures, the resources required to support the transaction with SMC (San Miguel Corporation), and our efforts to manage debt levels, we have lowered our dividend payout to 60% of Core Income,” said Manuel V. Pangilinan, Chairman and CEO of PLDT and Smart Communications.

“We are, however, keeping our traditional look-back approach with regard to full year dividends, to determine then the appropriate dividend payment for the full year,” Pangilinan added.

PLDT’s Fixed Line business remains firmly on the growth path, posting service revenues net of interconnection costs of Php30.9 billion in the first half of 2016, up 7.4% from the prior year. The share of data and broadband to total fixed line revenues has risen to 59% of the total, up from 57% in same period of 2015.

Wireless service revenues amounted to Php52.7 billion, 5.1% less compared to a year ago, largely due to declines in SMS and voice revenues. Revenues from data, broadband and digital platforms increased by 29% to Php14.1 billion, raising its share of total wireless revenues to 27% from 20% in the previous year.

Mobile Internet revenues led the way, rising 55% to Php8.1 billion as a result of improvements in the monetization of data services. This accounted for 27% of total data and broadband revenues in the period.

Fixed broadband revenues grew 16% to Php9.0 billion as the number of subscribers grew 14% to over 1.3 million with net additional subscribers of over 162,000. Corporate data and data center revenues grew 22% year on year to Php6.5 billion as our Enterprise Business Group continued to popularize digital solutions and data center services for both large and small-medium businesses.

The Group’s consolidated capital expenditures for the first half of 2016 amounted to P20 billion, up 44% from the same period last year. The higher capital expenditure level reflects the Group’s continuing program to roll out high-speed data infrastructure on its fixed-line network – in the form of more fiber-to-the-home (FTTH) facilities – and on its mobile network – particularly through the expansion of its 4G/LTE mobile network.

The full-year capex guidance for 2016 has been raised to Php48 billion to fund the deployment of facilities that will utilize the frequencies covered by the co-use arrangement, relating to the transaction with SMC, as approved by the NTC. In line with its commitment to the National Telecommunications Commission (NTC) under the co-use arrangement, Smart will equip by end-2016 360 cell sites with facilities using the 700 MHz spectrum to deliver 4G/LTE service in the Metro areas of Manila, Cebu and Davao. To date, eight (8) cell sites have been fired up. Smart has also switched on additional facilities in 2,221 cell sites in various parts of the country using the 1800 MHz spectrum to add capacity to its 2G service.

Last month, PLDT submitted its three-year network deployment plan to the NTC as part of its commitments under the co-use arrangement. Under this plan, Smart will speed up the expansion of its 4G/LTE service using both existing and new spectrum to cover 95% of the country’s cities and municipalities with 4G/LTE by 2018.

The plan also provides for the roll out of LTE-Advanced (LTE-A) which can deliver peak download speeds of over 200 Mbps by combining two or more frequency bands such 700MHz and 1800MHz.

The massive expansion of the 4G/LTE coverage complements the parallel strengthening of 3G coverage through the integration of Smart and Sun mobile networks. Moreover, PLDT is expanding the footprint of its FTTH service and Smart is deploying a much more extensive WiFi network. As an initial step, Smart just last week signed an agreement with the Department of Transportation (DOT) to install WiFi hot spots in the country’s major transport hubs like airports, seaports and bus terminals.

“Our comprehensive network improvement program highlights our commitment to deliver a higher level of Internet service to both consumer and enterprise customers. This is being accomplished through the deployment of the most advanced network technologies – FTTH for fixed and 4G/LTE for mobile. This provides the foundation for our digital pivot, enabling the Group to deliver an increasingly rich array of digital services and solutions to Filipinos all over the country,” stated Pangilinan.

Along with these efforts to strengthen its data infrastructure, PLDT is continuing to make it easier for its customers to adopt web-capable devices. To its existing portfolio of web-connected devices such as the TelPad and TVOLUTION, PLDT Home is adding a Smart Watch to help parents keep track of their children.

Smart has followed up its well-received offers of the MyPhone my28S and Smart Bro 4G Pocket WiFi (both for only P888) with a new smartphone. It has launched a highly successful promotion offering prepaid users the Starmobile Play Click smartphone which has a larger screen and better features for only P1,288.

To enable prepaid subscribers to use these devices more productively, Smart also introduced Giga Surf 50 (offering 1 Gigabyte of data for P50 for 3 days), a package which has already gained traction in the market.

“We’ve just finished refreshing the logos of both PLDT and Smart with the change signaling the renewed efforts of the Group to bring the best digital experiences to our customers. In the coming months, we will unbox more new services and solutions that will delight people and enable them to change their lives,” said Ariel P Fermin, PLDT Executive Vice President and Head of the Consumer Group.

Through its Enterprise business units – Alpha and SME Nation, PLDT is enabling businesses to embrace digital solutions that raise their efficiencies and let them serve their customers more effectively via M2M and ICT services – which include data center, Big Data, Cloud and other Managed ICT services.

PLDT is engaged in a major effort to set up the country’s most extensive network of data centers, which are key building blocks of the digital economy. On 28th July, PLDT inaugurated its largest and most modern data center in Makati with a 3,600-rack capacity and is set to open its eighth data center in Clark this September. By next year, PLDT will have 10 data centers in different parts of the country with an unmatched capacity of over 9,000 racks.

“We are systematically putting in place the various pieces needed to create vibrant digital ecosystems. Our networks provide pervasive connectivity while our data centers serve as a solid foundation for the country’s digital infrastructure,” said Ernesto R. Alberto, PLDT Executive Vice President and Head of the Enterprise Group.

PLDT subsidiary, Voyager Innovations, Inc., pushed further its digital innovation platforms in the first half of 2016.

Voyager’s freenet (formerly SafeZone) enabled Filipinos to participate through free live streaming in national events such as the Presidential inauguration and the FIBA Olympic Qualifying Tournament games of Gilas Pilipinas. freenet is the local community site with most hits (based on Effective Measure data) as of end-June 2016. It is enabling over 70 enterprise accounts to reach digital consumers through its sponsored data model.

PayMaya Philippines continues to take the lead in digital financial services. Account base for its prepaid wallet PayMaya doubled by end-June 2016 and is accelerating with the launch of its #NowNation campaign targeting uncarded millennials. In June 2016, PayMaya also launched a partnership with Uber Technologies Incorporated (Uber), making it the only prepaid card accepted by Uber.

“We continue to make progress in our digital pivot but at different paces for the Group’s various new businesses. Our Fixed Line and Enterprise businesses have gathered momentum in building their data and digital revenues, with the share of these revenues now reaching nearly 60% of the total,” Pangilinan said.

“Our wireless business is also gaining ground – data is now 27% of the total, up from 20%. But it has much further to go, in an environment where competition remains very keen. And this is where we are focusing our efforts – in both the prepaid and postpaid segments,” he added.

“Underpinning our digital pivot is a comprehensive program to improve our digital infrastructure. We are transforming not only our fixed and mobile networks, but also building a formidable system of data centers. This places PLDT in a unique position to lead in the development of the country’s digital economy. Within this context, we are maintaining our Core Income guidance of Php30 billion for 2016,” Pangilinan concluded.

PH Stocks Up on Positive Sentiment 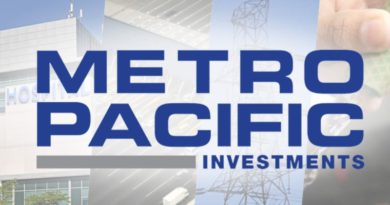