Manila—(PHStocks)—Despite the devastation brought about by the series of natural disasters that hit the country in the last quarter of 2013, the country’s Gross Domestic Product (GDP) grew by 6.5 percent in the fourth quarter of 2013, driven by the Services sector, particularly, Trade and Real Estate, Renting & Business Activities, and by the accelerated performance of Manufacturing, paving the way for the annual GDP to post a growth of 7.2 percent, according to the National Statistical Coordination Board.

On the demand side, sustained consumer and government spending for the whole year buttressed by increased investments in Fixed Capital Formation, particularly in Durable Equipment, contributed to the healthy GDP growth in 2013.  In the fourth quarter, the diminished government spending was not able to negate the robust GDP growth sustained by consumer spending and investments in fixed capital formation and the growth in international trade. 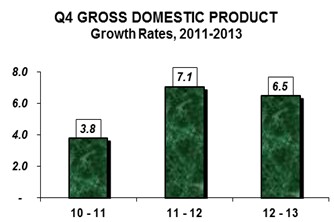 For the fourth quarter, NPI grew by 15.1 percent, the highest since the first quarter of 2010, from 2.7 percent the previous year.  This, together with the GDP performance, resulted to GNI’s growth of 7.8 percent in 2013 from the previous year’s 6.4 percent.

Per Capita Household Final Consumption Expenditure (HFCE), on the other hand, decelerated to 3.9 percent in 2013 from 4.8 percent the previous year.