Pasig–(PHStocks)–Philex Mining Corporation (PSE: PX) has announced its historic high financial and operating results for 2011, with Core Net Income reaching a record PhP5.568 billion, a 34% growth from the previous year. The robust performance was attributed to a blend of higher metal production and unprecedented market prices for gold, copper and silver.

Philex Mining also posted its highest Reported Net Income to date in its 54 years of operating history. Last year, the country’s biggest gold and copper producer posted Reported Net Income of PhP5.800 billion, a growth of 47% from PhP3.945 in 2010 and besting its previous record earnings of PhP5.006 billion in 2007.

“We owe our tremendous year-on-year improvement to the improving demand for metals in the world market and to the skills, dedication, and focus of our people,” said Manuel V. Pangilinan, Chairman and Chief Executive Officer of Philex Mining. “To all our management and staff, we extend our gratitude.”

Philex Petroleum Corp. (PSE: PXP), a 64.79%-controlled subsidiary, contributed PhP538 million to Philex Mining’s consolidated earnings this year, a turn-around from the loss of PhP191 million in 2010. Revenue from petroleum was almost five times the revenue of PhP112 million reported in 2010.

“Gold prices have soared 22% over the past year and global demand and supply for metals are expected to be fundamentally strong throughout 2012,” said Pangilinan. “Philex Mining will continue to lead and will focus on exploring additional revenue streams to maximize the opportunities presented by the world’s growing requirements for gold and copper.”

“Although declining grades of ore are expected from the Padcal Mine, the extension of the mine life to 2020 ramps up reserves to 806,000 ounces of gold and 333 million pounds of copper for the next nine (9) years. This synchronizes well with  our expanding portfolio of assets with the expected commencement of the Silangan Project in 2016,” Pangilinan added. “With the support of the Philippine Government, Philex Mining stays committed to optimizing the resources that our country offers for the shared benefit of our employees, shareholders, and more importantly, the communities where we operate, and at the same time, protecting and enhancing our environment.” 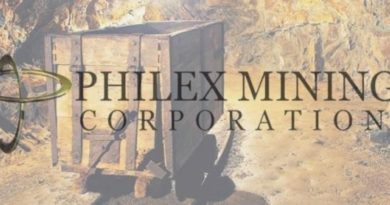