Manila—(PHStocks)—Bangko Sentral ng Pilipinas (BSP)—Headline inflation increased to 1.1 percent year-on-year in November from 0.4 percent in October, and was within the BSP’s range forecast of 0.4-1.2 percent for the month. The resulting year-to-date average inflation rate was still at 1.4 percent, which is below the government’s inflation target range of 3 percent ±1.0 percentage point for 2015.

Core inflation—which excludes certain volatile food and energy items to better capture underlying price pressures—also rose to 1.8 percent in November from 1.5 percent in the previous month. Meanwhile, on a month-on-month seasonally-adjusted basis, the change in the consumer price index was steady at 0.4 percent in November.

The headline inflation rate accelerated in November due mainly to the increase in food inflation as some tightness in domestic supply conditions—caused by recent weather-related supply disruptions—led to higher prices of key food items, particularly vegetables, fruits, meat, and fish. At the same time, non-food inflation went up as price increases of clothing and footwear as well as service-related CPI components such as health, restaurants and miscellaneous goods and services more than offset the continued decline in year-on-year inflation of housing, water, electricity, gas, and other fuels.

Governor Amando Tetangco Jr. said that the latest inflation reading supports the view that inflation has already bottomed out and will gradually move towards the target range for 2016-2017. With credit and liquidity growth also stabilizing, the current policy stance of the BSP remains appropriate.

Nevertheless going forward, the BSP will closely monitor actions of advanced economies, including the impact of moves by the European Central Bank, the US Federal Reserve, and Chinese authorities on domestic price and growth dynamics. 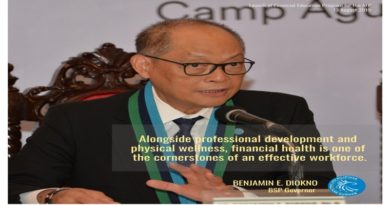