The year 2012 marked the first year of my investing “journey”. As the Philippine stock market posted growth after growth, so did some of my stocks, which I eventually sold – contrary to what I initially said about being in the market for a very long time.

But, since what I have invested in the market are just peanuts, I figured better sell now and lock in those gains – at least to have something to show for it, for my “investing pride” – before the market goes bonkers (which it didn’t).

Also, Warren Buffett also said that you have to always be ready to break your own rules. The market, during those times I sold the stocks, is to my advantage, so there we are. Who was to doubt the Oracle of Omaha?

For comparison, here are the interest rates for Metrobank and Philippine National Bank (PSE: PNB). I take it that they are for a one-year period.

Indeed, they are right: you will gain more money by investing – effectively beating inflation – than having all your money in banks. I am not saying you should not have a savings deposit; you have to have savings, and they say it should be at least six months of your current salary. I only said you will gain more. The kicker here, however, is that you have to invest in a really good company.

Mistakes, I said in my topic, because I didn’t stay long in the market, and have been very eager to lock in those gains. However, I consider it no harm done because at least I gained.

This one, on the other hand, is a mistake that just proves how novice I am in investing in the stock market. A very elementary and stupid mistake, actually. And I have no excuse for it but to say I was wrong, for I didn’t do my research – a basic one will do, actually – and I didn’t consider all fundamentals.

I am talking about San Miguel Brewery Inc. (PSE: SMB) – yes, the maker of one of our symbols of tradition of “happyness” – San Miguel Pale Pilsen, and to the yuppies when it arrived, the San Mig Light. The company also has the following in its portfolio: Red Horse and Gold Eagle. 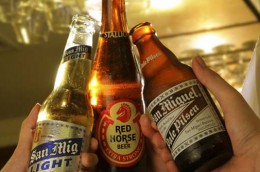 So why did I consider this a mistake? Here’s the situation. Christmas week is approaching. And being the Pinoys that we are, happy gatherings are expected. Eating, drinking, partying, and singing. San Mig Light, San Miguel Pale Pilsen, Red Horse, Ginebra, etc., everything, I expect, will be flowing.

But much to my dismay, everything but the stock price of SMB flowed. First and foremost, SMB’s public float is way, way, way below the required 10% minimum public ownership by the Philippine Stock Exchange (PSE); it didn’t even make 1%. SMB is only at 0.61%. As per PSE rules, public companies must have an MPO of at least 10%, otherwise, they will be delisted from the stock exchange. And to make matters worse, they recently changed the compliance deadline to December 31, 2012.

I failed to check this, and I didn’t see the disclosure – which is publicly available and just a click away – by SMB saying that the Securities and Exchange Commission (SEC) has denied all requests by the company for extension of the grace period to comply with the MPO. Had I seen this, I wouldn’t even think of touching SMB.

But I didn’t do my research well, so I did buy SMB a few days before Christmas – hoping for that gain because of the season.

Another thing, I bought SMB despite the fact that the Sin Tax had just been signed into law. This was at the back of my mind, but when I realized this, and I saw that the SMB stock price is tanking, I was still convincing myself that the Law will not drastically affect yet SMB sales at the end of the holiday season. You see, I was planning to sell SMB around early this month.

But late last week, I have to cut my losses. And move on. SMB has been faltering – which is expected – given that two days before the end of the trading year, the company still hasn’t made any announcements on whether or not it opened up or sold additional shares to boost public ownership. I guess they have just resigned to the fact that they will be delisted.

In the end, I lost almost 5.2% from that trade. Not to mention the charges when I bought the shares.

What the heck. I would just consider myself having bought a case of San Mig Light, without having a taste of any drop of it.

You will definitely make money by investing in stocks. But you have to be really careful which companies to invest in. That mistake is something that I vow will never happen again this year.

IS Board Approves Stock Rights Offering