Manila—(PHStocks)—The Philippines cannot compete against its counterparts in the ASEAN, for instance Thailand and Indonesia, when it comes to food prices. This, according to Filipino F&B manufacturers who I’ve had the chance of talking to at a recent food and beverage exhibition here in Singapore.

A canning company noted that one of the reasons for this is that governments of the above countries have been heavily supporting their F&B domain. In Thailand, for instance, if the government mandates a certain focus for the industry, everyone follows it.

Another issue being pointed out by F&B companies in the country is power. A sardine manufacturer said that in their manufacturing facility in Zamboanga, they are having four- to eight-hour power outages every day. That has affected not just them, he said, but everybody in the sardine business, especially the can manufacturer. He noted that they  are finding defects in the cans because of these power outages.

Price of oil also has a big impact on their businesses. The sardine manufacturer noted that oil price accounts for a huge amount of cost in their business. He said from just about 20-30% of cost, oil now accounts for around 50-60% of their manufacturing cost. He said every time the price of crude oil increases, the prices of fish–the main raw material for sardines–follows. Such is the reason for the high prices of fish.

He added that he is not quite sure how their counterparts in the ASEAN are addressing these issues. His opinion is that they have lower power rates, lower cost of labor, or government subsidies. The bottom line, he noted, is that their products are cheaper compared to Philippine-made goods.

A coconut water company exec talked about the limited number of packaging providers in the country. She noted that to be economically feasible, they have no choice but to work with only a handful of packaging companies in the Philippines. If they will continue to import packaging solutions, their products, fresh coconut water, will become even more expensive.

I was able to talk to a publicly listed company, who is also selling coconut water. She noted that Thailand is one of their competitors. In terms of pricing, their products are cheaper because the government is giving them a subsidy, she said. For bananas, Ecuador has cheaper products than the Philippines, she added.

Apart from the above issues, competition is also a big problem for Philippine F&B manufacturers. The sardine company said that while Thailand and Indonesia remain one of their biggesr competitors, China is now already starting its own manufacturing plant for canning.

Despite these issues, F&B makers still admit there are a lot of opportunities out there in the market. An executive said that their fresh products line, such as bananas and mangoes, are still the preferred choice of many countries.

The reason why their export market is still strong is that they are serving a lot of Filipinos abroad. According to the sardine maker, overseas Filipinos tend to buy their own brand.

The coconut water company noted that  their products are becoming more popular in the United States. This, she said, is having a “trickle” effect, in that other countries will eventually realize the benefits of coconut–so it helps in advertising itself. She added, however, that fresh coconut is not common yet outside the country. Their product provides customers the real taste of coconut water. It is not processed; cut the fruit, put the water in the bottle, and freeze it. It’s the freshest coconut water in the market, accorsing to her. There are no preservatives. She noted that that’s the most natural customers can get, as opposed to importing the fruit.

Despite the issues above, the sardine maker is confident that they can compete with Thailand and Morocco in terms of quality. They got certifications, QC and QA.

For the government’s part, he said BFAR, the certifying body, renews their certification every six months. Despite the hassle, he said this is fine because this ensures the safety of the products for their consumers.

The executive of the publicly listed company I talked to said they are also very particular on the quality of their products. She said they are working to meet the FSSC2200 standards this year. They are already certified to HACCP.

Traceability, one of the most important initiatives now to ensure global food safety, is also inherent in their DNA for the reason that they are farm-to-plate: from the farm itself, they are already in full control, all the way to harvesting, processing, and packaging.

Filipino F&B manufacturers do acknowledge the support being given by the government. For instance, their pavilion at the said event was government funded.

But it is still not enough. According to one company, some departments are supportive, but other issues remain, such as transportation costs, and poor or lack of infrastructures such roads and bridges. In fact, she noted that shipments going to Davao are more expensive than those going to Singapore, for instance.

The Philippine potential is big. The country is said to have one of the most biodiverse ecosystems in the world. There are a lot of things that can be grown in the Philippines. But F&B manufactures said the government needs to do more to support these initiatives.

NOTE: I cannot disclose the names of the people I’ve talked to and the companies they work for, and the event I went to. But rest assured that the above is not a figment of my imagination.

For comments, violent reactions, or whatever tickles your fancy, just drop me a note here: richard@phstocks.com. 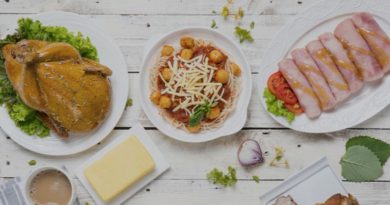