Manila—(PHStocks)—International Container Terminal Services Inc. (PSE: ICT) has reported unaudited consolidated financial results for the first half of 2015 posting revenue from port operations of $552.1million, an increase of 8 percent over the $510.3 million reported for the same period last year; earnings before interest, taxes, depreciation and amortization (EBITDA) of $237.4 million, 12 percent higher than the $212.2 million generated in the first six months of 2014; and net income attributable to equity holders of $100.4 million, down one percent over the $101.7 million earned in the same period last year. Diluted earnings per share for the period was likewise lower by one percent to $0.042 from $0.043 in 2014.

In the first half of 2014, the company recognized gains on the sale of a non-operating subsidiary in Cebu, Philippines, the termination of management contract in Kattupalli, India, and the settlement of the insurance claims in Guayaquil, Ecuador of $13.2 million, $1.9 million and $1.5 million, respectively. In the first half of 2015, the company also recognized nonrecurring items such as the $0.3 million gain on the sale of the terminal in Naha, Japan, the recognition of a $1.3 million wealth tax on its equity in the project in Aguadulce, Colombia and a $0.6 million one-time super tax recognized at the terminal in Karachi, Pakistan. Excluding these one-time gains and charges, recurring net income surged 20 percent in the first half of 2015.

For the quarter ending 30 June 2015, revenue from port operations decreased two percent from $261.4 million to $256 million while EBITDA was one percent higher at $109.8 million from $108.6 million. Net income attributable to equity holders declined six percent from $49.3 million to $46.4 mi llion for the same period in 2014. Excluding the non-recurring gains recognized and one-time tax expenses at the terminals in Karachi, Pakistan and Aguadulce, Colombia, recurring net income would have increased five percent. Diluted earnings per share for the quarter decreased from $0.021 in 2014 to $0.019 in 2015.

ICTSI handled consolidated volume of 3,888,130 twenty-foot equivalent units (TEUs) in the first six months of 2015, nine percent more than the 3,566,023 TEUs handled in the same period in 2014. The increase in volume was mainly due to the continuing volume ramp-up at Contecon Manzanillo S.A. (CMSA) in Manzanillo, Mexico and Operadora Portuaria Centroamericana, S.A. de C.V. (OPC) in Puerto Cortez, Honduras; new shipping line contracts and services at Pakistan International Container Terminal (PICT) in Karachi, Pakistan; increased demand for services at Subic Bay International Terminal Corp. (SBITC) in Subic Bay, Philippines; favorable impact of consolidation at Yantai International Container Terminal (YICT) in Yantai China; and the contribution of the Company’s new terminal, ICTSI Iraq, in Basra, Iraq which began commercial operation in November 2014. Excluding the volume generated by the new terminal in Iraq, organic volume growth was at seven percent. The company’s eight key terminal operations in Manila, Brazil, Poland, Madagascar, China, Ecuador, Pakistan and Honduras, which accounted for 77 percent of the Group’s consolidated volume in the first half of 2015, grew six percent compared to the same period last year. For the quarter ending June 30, 2015, total consolidated throughput was five percent higher at 1,905,357 TEUs compared to 1,808,928 TEUs in 2014.

Gross revenues from port operations for the first half of 2015 increased eight percent to $552.1 million from $510.3 million reported for the same period in 2014. The increase in revenues was mainly due to volume growth at most of the company’s terminals; favorable volume mix and higher ancillary services at SBITC in Subic Bay, Philippines; new shipping line contracts and services at PICT in Karachi, Pakistan; favorable impact of the consolidation of terminal operations in Yantai, China; continuing ramp-up at OPC in Puerto Cortes, Honduras and CMSA in Manzanillo, Mexico; and the revenue contribution of the Company’s new terminal in Basra, Iraq. This however was partially off-set by lower storage and break-bulk revenues combined with the 29 percent depreciation of the Brazilian Reais (BRL) against the US dollar at Tecon Suape S.A (TSSA) in Recife, Brazil; the discontinued vessel calls by two major shipping lines as a result of continuing labor disruption at ICTSI Oregon Inc. (IOI) in Portland, Oregon, USA; weaker short-sea trade and reduced vessel calls at Baltic Container Terminal (BCT) in Gdynia, Poland; and slow economic activity coupled with the 23 percent depreciation of the Euro against the US dollar at Madagascar International Container Terminal Services, Ltd. (MICTSL) in Toamasina, Madagascar.

Excluding the revenues from the new terminal, organic revenue growth was at six percent and further removing the unfavorable effect of the 29 percent depreciation of the BRL and the 23 percent depreciation of the Euro against the US dollar would have resulted to a nine percent growth in revenue. The Group’s eight key terminal operations in Manila, Brazil, Poland, Madagascar, China, Ecuador, Pakistan and Honduras, which accounted for 82 percent of the Group’s consolidated revenues in the first six months of 2015, grew nine percent compared to the same period last year.

Consolidated cash operating expenses in the first six months of 2015 grew two percent to $226.5 million from $221 million in the same period in 2014. The increase was mainly driven by the contribution of a new terminal in Iraq and start-up costs of projects in Melbourne, Australia, Lekki, Nigeria, and Tuxpan, Mexico. This increase, however, was tapered by the depreciation of the BRL and the EURO as the cash operating expenses of the terminals in Brazil and Madagascar were translated to a lower dollar equivalent. Excluding the cost associated with the new terminal and projects, total cash operating expenses would have increased by only 0.3 percent.

Consolidated financing charges and other expenses for the first semester increased 13 percent from $29.6 million in 2014 to $33.3 million in 2015. The increase was primarily due to higher interest expense resulting from the issuance of an additional $75 million of medium-term notes in April 2014 and the consolidation of $35.8 million of loans as a result of the consolidation of the terminal operations at Yantai, China in July 2014.

Capital expenditures for the first six months of 2015 amounted to $136.7 million, approximately 26 percent of the $530 million capital expenditure budget for the full year 2015. The established budget is mainly allocated for the completion of development at the Company’s new container terminals in Mexico, Honduras and Iraq, capacity expansion in its terminal operation in Manila, and to start the development of the new terminals in Democratic Republic of Congo and Australia. In addition, ICTSI invested $52.9 million in the development of Sociedad Puerto Industrial Aguadulce S.A. (SPIA), its joint venture container terminal development project with PSA International Pte Ltd. (PSA) in Buenaventura, Colombia. The Company’s share for 2015 to complete phase one of the project is approximately $140 million.

ICTSI is widely acknowledged to be a leading global developer, manager and operator of container terminals in the 50,000 to 2.5 million TEU/year range. ICTSI has an experience record that spans six continents and continues to pursue container terminal opportunities around the world. 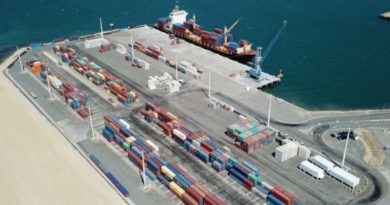