Manila—(PHStocks)—Bangko Sentral ng Pilipinas (BSP)—Headline inflation slowed down to 0.9% year-on-year in February from 1.3% in January, but was within the BSP’s range forecast of 0.9-1.7% for the month. The latest figure brought the year-to-date average inflation rate to 1.1%, below the Government’s inflation range target of 3.0 percent ±1.0 percentage point for 2016.

Similarly, core inflation—which excludes certain volatile food and energy items to better capture underlying price pressures—decelerated to 1.5% in February from 1.8% in the previous month. Meanwhile, on a month-on-month seasonally-adjusted basis, inflation was steady at 0.1% in February.

The lower February inflation reading was driven largely by the decline in prices of selected non-food items. In particular, non-food inflation eased as a result of lower gasoline and LPG prices as well as the reduction in jeepney fares in certain regions. At the same time, food inflation also decelerated with the continued decline in rice prices relative to year-ago levels.

Governor Amando M. Tetangco Jr. said that the February inflation outturn continued to support the BSP’s outlook of within-target inflation over the next two years. Looking ahead, the BSP will continue to monitor evolving price trends as well as developments on both domestic and global fronts to ensure price stability conducive to balanced and sustainable economic growth. 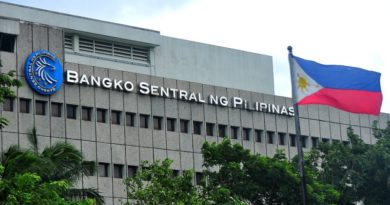 Inflation Slows Down to 2.4 Percent in August