Makati—(PHStocks)—Local cement firm Eagle Cement Corp., with ticker symbol EAGLE, reinforced its presence in the local cement industry as it debuted in the local bourse last 29 May 2017 with the traditional bell ringing ceremony at the Philippine Stock Exchange (PSE).

EAGLE sold 500 million common shares by way of primary offer with an overallotment option of up to 75 million secondary shares. Shares were priced at PhP15 a piece resulting to a market capitalization of PhP75 billion.

The company raised approximately PhP6.9 billion in net proceeds from its primary offer which will be used to partially finance the construction of its PhP12.5 billion Cebu cement plant and marine terminals allowing it entry to the Visayas and Mindanao markets.

EAGLE’s IPO was anticipated with excitement by institutional and retail investors as the company exhibited consistently strong financials over the past years. The warm reception was also due to the government’s long-term plan to increase infrastructure spending, which will consequently bolster the demand for cement in the Philippines.

“Growth will be EAGLE’s game coming from this IPO. And this resolve is strengthened even more by the confidence shown to us by investors who believe in our capabilities and products. This achievement is only a take off point for EAGLE as we continue to shake up the Philippine cement industry,” says EAGLE Chairman Ramon Ang.

Post-IPO, EAGLE’s value is expected to grow further with the continued boom of the real estate market and expanding tourism sector, both of which will spur more construction activity. According to industry estimates, Philippine cement consumption will rise to at least 39 million metric tons in 2022 from only 26.7 million tons in 2016.

Apart from its aggressive expansion plan in Visayas and Mindanao, EAGLE also boasts an efficient production structure, backed by the most advanced and largest single-site cement plant in the Philippines. Located in Bulacan and presently running with two production lines, EAGLE’s plant currently produces 5.1 million metric tons of cement per annum or approximately 130 million bags a year.

The company’s modern manufacturing equipment allows it to implement production efficiencies that contribute to strong financials and delivery of quality products. In 2016, EAGLE sold a record of 77 million cement bags with a net income of PhP4.11 billion, up by 11.7% from PhP3.68 billion in 2015.

EAGLE, led by Chairman Ramon Ang and President and CEO Paul Ang, is currently the fourth largest player in the industry based on sales volume. It has a strong foothold in the National Capital Region and Central Luzon and boasts of having the fastest growing market share among industry peers since it started commercial operations in 2010. 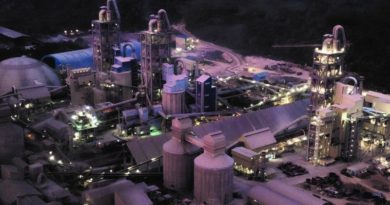 One thought on “EAGLE Takes Flight in Stock Market Debut”