Makati—(PHStocks)—China Banking Corp. (China Bank, PSE: CHIB) posted a consolidated net income of PhP4.84 billion from January to September 2016, 31% higher than the profits recorded for the same period last year, attributable to the strong growth in its core and fee-based businesses. This translates to a return on equity (ROE) of 10.47% and a return on assets (ROA) of 1.19%.

Total operating income grew 16% to PhP16.46 billion, with net interest income up 9% year-on-year to PhP12.26 billion, driven by the 19% growth in loan portfolio. Fee-based revenues improved 42% to PhP4.21 billion from last year’s PhP2.96 billion, bolstered by trading and securities gains rising 226% to PhP1.19 billion, 13% growth in service charges, fees & commissions, and 123% increase in income from assets acquired. Net interest margin was at 3.22%. The growth of operating expenses was controlled at 9% to PhP10.08 billion even as the Bank continued to strengthen its operations with new investments and more branches, ATMs, and human resource complement.

“We are pleased to note that our core business drivers continue to show robust growth,” said Ricardo R. Chua, China Bank President and CEO. ―These positive results indicate that we are on track to meet our business goals for this year, especially with the turnaround of our China Bank Savings subsidiary into a significant contributor to group profitability.” 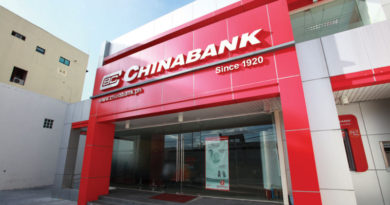