Taguig—(PHStocks)—DFNN Inc. (PSE: DFNN) has announced that it received late last Friday, November 25, a copy of the Decision of the Court of Appeals (CA) in CA-G.R. Sp. No. 145983 entitled “Philippine Charity and Sweepstakes Office (PCSO) vs DFNN, INC. (DFNNI)” affirming the PhP310 million monetary award made by the Regional Trial Court (RTC) of Makati City Branch 66 in favor of DFNN.

In a Decision promulgated last 17 November 2016, the CA dismissed the petition filed by the PCSO assailing the PhP310 million monetary award granted to DFNN by the Makati RTC. In affirming the lower court’s ruling, the appellate court declared that, “the Makati RTC correctly granted DFNN’s Petition for Correction, which petition correctly observed the proper procedure for the correction of an evident miscalculation of figures in the arbitral award.”

It will be recalled that an Ad Hoc Arbitration Panel had earlier declared that PCSO erred when it rescinded DFNN’s Equipment Lease Agreement (Systems Design Development, and Upgrade for Lotto Betting Via Personal Communication Devices [PCD] via TEXT, GPRS, BlueTooth, 3G, WiFi Protocols, and other wireless devices) (ELA).

In ruling that PCSO improperly terminated the aforesaid ELA with DFNN, the arbitration panel noted that the grounds relied upon by PCSO to effect cancellation of DFNN’s contract were misplaced and/or unfounded. Moreover, the arbitration panel acknowledged that DFNN’s undertaking under the ELA was satisfied when “DFNN delivered, as it did, a system that was integratable with PCSO’s existing lotto betting system.” Accordingly, the arbitration panel ordered PCSO to pay DFNN PhP27 million as liquidated damages on account of the improper termination of the ELA.

Thereafter, DFNN sought a correction of the PhP27 million monetary award by filing a Petition for Correction of Arbitral Award with the RTC of Makati as the arbitration panel seemed to have overlooked the applicable 2% interest on the amount due as stipulated in the ELA. The RTC Makati found merit in DFNN’s Petition and ruled that DFNN was entitled to a corrected monetary award of PhP310 million plus interest in accordance with the provisions of the ELA. It was this Decision of the Makati RTC that the PCSO appealed from by filing the above-captioned Petition before the CA. However, as hereinabove mentioned, the CA did not find merit in PCSO’s contentions and, thus, affirmed the ruling of the Makati RTC granting the P310 million (plus interest) monetary award to DFNN.

DFNN President and CEO Ramon Garcia Jr. states, “While we are happy with the favorable ruling by the Court of Appeals, we would also like to express our willingness to forge a mutually acceptable settlement agreement with the present PCSO Management.”

DFNN Inc. is a publicly listed company on the Philippine Stock Exchange (Ticker: DFNN). Since 1999, the Company has operated as a leading I.T. solutions provider and systems integrator, enabling its clients to compete in an increasingly technology dependent environment. Backed by its domain expertise in the financial sector, DFNN has competencies in: software/middleware development, I.T. support services, secure platform development, and turnkey implementations. Through its subsidiaries, DFNN also possesses licenses for Electronic Gaming Machines (EGMs), sports betting, and digit and pari-mutuel games with the Philippine Amusement and Gaming Corporation (PAGCOR). DFNN believes that its unique background as an I.T. company with a strong success and track record puts it in a unique position to explore and maximize opportunities in various sectors. Our slogan: “Technology at Play”. 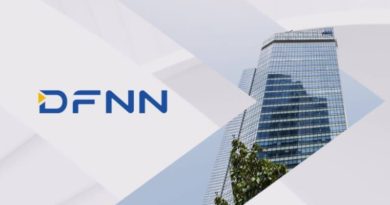 Execution of a Binding Term Sheet by iWave