Makati–(PHStocks)–BDO Unibank Inc. (PSE: BDO) posted an audited net income of PhP10.5 billion in 2011. This is in line with its earnings guidance and represents a 19% growth over the PhP8.8 billion net profit posted in 2010.

Despite the slower GDP growth of 3.7%, BDO expanded its loan portfolio by 24% to PhP670.1 billion in 2011 by focusing on creditworthy borrowers in fast-growing industry sectors. The Bank not only outpaced the industry’s 19% loan growth but also kept asset quality in check. The Bank’s gross non-performing loan (NPL) ratio further declined to 3.4% by end-2011 from 4.7% in 2010 while NPL coverage improved to 106% from 92% as the Bank continued to provision conservatively, with PhP6.1 billion in provisions set aside for the year.

BDO sustained its robust growth in low-cost deposits leading to a 10% increase in total deposits to PhP858.6 billion. While the Bank’s funding mix improved, net interest income remained flat due to the continued downtrend in asset yields arising from excess system liquidity.

The Bank’s recurring fee-based income from its service businesses rose 18% to PhP12.3 billion. Amid a volatile external environment, BDO  generated a 10% increase in trading and foreign exchange gains to PhP6.5 billion. Along with other miscellaneous income, BDO recorded a 17% growth in non-interest income to PhP20.9 billion.

Having completed its investments in capacity, BDO is now starting to benefit from scale with operating expenses increasing only moderately by 4% to PhP36.3 billion. Pre-provision operating profit therefore grew 7% to PhP18.4 billion.

Looking forward, the Bank will continue to take advantage of promising growth opportunities across industry and geographic segments while positioning defensively against potential external or industry threats. 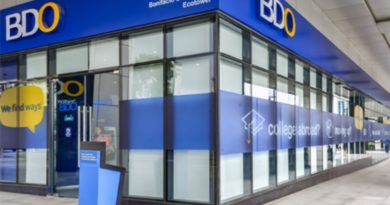