An issuer rating is an opinion on the general and overall creditworthiness of the issuer, evaluating its ability to meet all its financial obligations within a time horizon of one year. The focus is on financial strength and stability under normal and stressed conditions to be able to meet existing and prospective financial obligations.

A company rated PRS Aa differs from the highest rated corporates only to a small degree, and has strong capacity to meet its financial commitments relative to that of other Philippine corporates. PhilRatings can also include a plus (+) or a minus (-) sign to further qualify the rating.

The issuer rating takes into account the following key considerations: a) AUB’s highly-experienced management; b) the bank’s more than satisfactory funding profile; c) expectations that its profitability will remain stable, supported by growing interest income and sound management of expenses; d) the bank’s competitive strategy which is supportive of its growth targets; and e) expectations that the banking industry will continue to benefit from the positive outlook of the domestic economy.

AUB is considered a mid-size player in the Philippines’ universal/commercial banking sector, with assets of P165.5B, as of December 31, 2016. The bank’s ranking among all universal and commercial banks, based on Bangko Sentral ng Pilipinas (BSP) data as of end-2016 was as follows: assets, 15th; deposits, 15th; total loans, 13th and capital accounts, 12th.

AUB Senior Management is led by Abraham T. Co, who has been president of AUB since 1997. Co, 68 years old, is considered to be highly-experienced in the banking and finance industry. Outside of AUB, Co’s previous positions include President, First Malayan Leasing and Finance Corp.; Head of the Consumer and Operations Support Group, Rizal Commercial Banking Corp. (PSE: RCB); and President, BA Finance Corp.

AUB’s funding profile was more than satisfactory as of the first quarter of 2017, with deposits accounting for 91.4% of total liabilities. Share of current and savings accounts (CASA), which are considered as less expensive and more stable funding sources, to total deposits was high at 79.3%. From end-2016, total deposits increased by 4.7% to PhP135.8 billion, due to more intensified deposit-generation campaigns for branch banking and other business segments. Deposit growth will be supported by the addition of new branches, with CASA continuing as AUB’s primary funding source, going forward.

In the first quarter of 2017, profitability measures showed marginal improvement, as the significant 22.3% decline in non-interest revenues translated to a modest hike of 6.3% in revenues. Net interest income, however, continued to post double-digit growth of 16.1% to PhP1.5 billion, largely due to lower interest expense. Interest expense went down by 11.3% to PhP390.2 million, attributable to increase in low-cost deposit volume. Net interest income accounted for a high 81.4% of revenues.

On a positive note, management of expenses remained largely under control. Expenses (excluding provisions) to average assets ratio was 2.4%, which is within historical levels. Year-on-year expenses growth was a minimal 3.2%, to PhP1 billion.

Profitability measures for the forecast period will be within historical levels. Interest income (net) is projected to continue to grow at double-digit rate, as the bank continues to grow its commercial and consumer loans (including credit cards). Growth in operating expenses (opex) is expected be minimal, and will support the forecast increase in the bank’s net income.

AUB will continue to anchor its competitive strategy on its modern technology platform, expanding branch network and highly-experienced management. These initiatives are seen to support AUB’s goal of continued double-digit growths for its balance sheet and profitability, going forward. 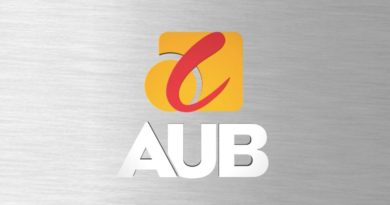