The balance of payments (BOP) surplus stood at $7.9 billion in the fourth quarter of 2010, a nearly fourfold increment over the $2 billion surplus registered in the comparable quarter a year ago, according to the Bangko Sentral ng Pilipinas (BSP). The appreciable improvement in the external payments position was due to the robust net inflows in the capital and financial account, reflecting the strengthening global economic recovery and improved risk appetite for emerging market assets. The economy’s strong macroeconomic fundamentals also encouraged the flow of foreign capital into the country.

As a result of these developments, the cumulative BOP for the full year of 2010 yielded an all-time high surplus of $14.4 billion, more than double the $6.4 billion surplus achieved a year ago.

With the healthy external payments position, the country’s gross international reserves (GIR) rose appreciably to $62.4 billion as of end-December 2010, a 41% build-up compared to the $44.2 billion level posted in end-2009. At this level, reserves could adequately cover 10.3 months’ worth of imports of goods and payments of services and income. It was also equivalent to 10.9 times the country’s short-term external debt based on original maturity and 5.8 times based on residual maturity.

Current Account. The current account registered a surplus of $2.2 billion, equivalent to 3.9% of GDP. This level, however, was lower than the $2.7 billion surplus (5.7% of GDP) posted a year earlier. This developed as a result of the higher deficit in the trade-in-goods account. The sustained surplus in the current account was supported by higher net inflows in the services, income, and current transfers accounts during the quarter. In particular, the trade-in-goods deficit rose to $3.2 billion from $2 billion the previous year as imports growth of 28.2% outpaced exports growth of 22.4%. Imports of goods totaled $16.1 billion compared to $12.6 billion in Q4 2009, as all major import commodity groups recorded double-digit growth rates, reflecting improved domestic economic activity and inventory build-up. Meanwhile, exports of goods reached  $12.9 billion, sustaining the double-digit expansion beginning in the first quarter of the year. The export sector’s continued recovery reflected the strengthening of global demand, particularly from the country’s fast-growing Asian neighbors notably China (including Hong Kong Special Administrative Region (SAR)), Singapore and Taiwan. Specifically, China’s strong economic momentum spurred growth prospects in intra-regional trade in Asia.

Net receipts from trade-in-services expanded to $420 million in Q4 2010, reflecting a 12.3% increment from the $374 million surplus registered in the same quarter a year ago. This resulted mainly from higher net receipts in construction, computer and information, and other business services, particularly miscellaneous business, professional, and technical services, which consisted mostly of business process outsourcing (BPO)-related transactions. The net receipts registered in these accounts were partly negated by net payments posted in transportation (notably payments for freight, reflecting the growth in goods imports), travel, insurance, royalties and license fees, government, and personal cultural and recreational services.

The income account registered a surplus of $528 million in Q4 2010, more than double the surplus of $187 million in the comparable quarter a year ago. The favorable performance was due mainly to: a) increased earnings of resident overseas Filipino (OF) workers amounting to $1.4 billion, higher by 13.1% compared to the year-ago level, and b) lower net payments in the investment income account (by 17.8%) at $842 million during the review quarter.

The current transfers account posted a surplus of $4.4 billion, up by 6.8% from the year-ago level of $4.1 billion, as remittances from non-resident OFs remained strong at $4.3 billion. The 8.3% expansion in OF remittances reflected the continued strong demand for Filipino manpower in foreign labor markets as well as the broader remittance transfer networks of local banks and other financial institutions.

Capital and Financial Account. Net inflows in the capital and financial account rose to $5.7 billion in Q4 2010, considerably stronger than the $511 million net inflows posted in the same period a year ago. This developed following the surge in net inflows of portfolio, direct and other investments. Investor risk appetite for emerging market assets continued to improve, notwithstanding concerns arising from the sovereign debt crisis in some parts of Europe and from inflation pressures, particularly in fast growing emerging markets. On the domestic front, the economy’s solid macroeconomic fundamentals and brighter growth potentials helped boost capital inflows into the country.

Direct investment net inflows reached $613 million in Q4 2010, more than double the $255 million net inflows recorded in the same quarter in 2009. The improvement was driven primarily by the rebound in net inflows of foreign direct investments to $713 million during the quarter from only $349 million in Q4 2009. This developed as investors were encouraged to infuse equity capital in new and existing projects in view of expectations of the economy’s brighter prospects together with improved risk appetite for emerging market assets.

Portfolio investments yielded net inflows in the fourth quarter at  $3.7 billion, more than three times the $1.2 billion net inflows realized in the same quarter a year ago. Higher yield differentials favoring emerging market assets boosted investment inflows into the country. This development helped drive the Philippine Stock Exchange index (PSEi) to average 4,141.2 index points during the quarter, higher by 37.9% than the year-ago level.

The other investment account recorded net inflows amounting to $1.4 billion in the fourth quarter, a turnaround from the $1 billion net outflows in the same quarter a year ago. In particular, the following transactions contributed  to the net inflows in the other investment account: 1) repayments of loans extended by local banks to non-residents ($1.7 billion); 2) net placements by non-residents of their currency and deposits in local banks ($1.2 billion); and 3) net foreign loan availments by local banks ($791 million) and public and private corporations ($106 million).

Current Account. The current account remained in surplus in 2010 at $8.5 billion, equivalent to 4.5% of GDP. This was slightly lower than the $9.4 billion surplus in 2009 on account mainly of the higher deficit in trade-in-goods and lower net services receipts, even as higher net current transfers and income receipts were posted.

Net services receipts declined by 7.9% to $1.9 billion in 2010, due mainly to higher net payments for transportation, travel, insurance, royalties and license fees, government and personal, cultural and recreational services, combined with lower net receipts from communication services. These were partly mitigated by the higher net receipts registered in BPO-related services, specifically other business services (by 22.3%) and computer and information services (by 23.2%).

On the other hand, net current transfers receipts grew year-on-year by 1.9%, due mainly to the 7.2% growth in remittances of non-resident OFs, which amounted to $16.2 billion in 2010. The major driving factors that helped accelerate the growth in remittances were the diversity of the destinations (which makes remittances more resilient even in the midst of shocks occurring in select host economies) and skills of overseas Filipinos combined with the expanding network of bank and non-bank service providers both locally and abroad to capture a larger share of the global remittance market.

The income account recorded a surplus of $308 million, a reversal of the $193 million deficit in 2009. The marked improvement was mainly due to the 11.8% rise in gross earnings of resident OFWs, which reached $5.1 billion in 2010. This more than made up for the higher net payments of investment income at $4.8 billion, arising largely from higher interest payments on bonds issued by the NG (by 12.1%) and some private corporations (by 7%).

Capital and Financial Account. The capital and financial account registered $7.9 billion of net inflows for 2010, a substantial turnaround from the $1.6 billion of net outflows in 2009. This developed as net portfolio and net other investments reversed to positive territory during the year. Net inflows improved as investors in search of higher yields channeled their funds to emerging markets, following signs of further recovery in the global economy, particularly in Asia. Other factors such as the country’s solid macroeconomic fundamentals and resilience during the global crisis, the stable banking sector, and favorable growth outlook also boosted foreign investor interest.

a) The portfolio investment account realized $4 billion of net inflows during the year, a sharp reversal of the $625 million of net outflows in 2009. The major inflows in 2010 included the following: 1) non-residents’ subscriptions to the bonds/notes flotation of the NG ($6.6 billion), local banks ($422 million), and local private corporations ($2.5 billion); 2) non-residents’ placements in peso-denominated government securities ($2.8 billion); 3) net resale by residents in the secondary market of Philippine debt papers originally issued abroad by the NG ($375 million); and 4) non-residents’ net placements in equity securities issued by local banks ($162 million) and local corporations ($319 million).

c) Meanwhile, the direct investment account yielded net inflows amounting to $1.2 billion, lower by 23.6% compared to the net inflows posted a year ago. This developed as non-residents’ direct investments in the country declined from $2 billion in 2009 to $1.7 billion in 2010. Specifically, equity capital investments in new and existing projects moderated during the year as investor sentiment was generally marked by cautiousness amid uncertainties surrounding the sovereign debt crisis in some parts of Europe and as inflation concerns escalated in some fast growing emerging markets. Net inflows of equity capital investments amounted to $848 million, more than 50% lower than the net inflows posted in 2009 when large-scale investments were recorded arising from the privatization of a local power corporation and the acquisition of shares of a local beverage manufacturing firm. 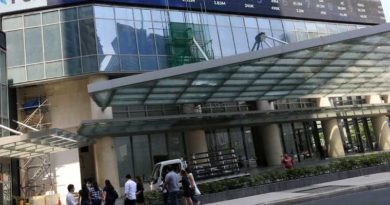